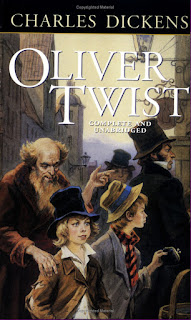 Though it was one of Dickens’ first novels, is still very popular.I liked it very much and also advise you to read it. Oliver is a young boy whose life is a series of ups and downs, of bad and good fortune. He begins life in a workhouse, where he is badly treated. He runs away to London and gets caught up with a gang of thieves. He escapes from the gang and is saved by a kind old gentleman, but the gang catches him again, and so it continues. The story is breathtaking in its constant dramatic changes of fortune.
Some of Oliver Twist are common to Dickens’ novels; for instance, the picture Dickens creates of crime and low life. Dickens tries to show how poverty make people into criminals. There is a strong social message in Oliver Twist.
Dickens’ strong subjects- violent crime, love, hate, power, money- mean his story are always dramatic. At the same time, he is a humorous writer; for example, Mr Bumble, the beadle, is feared by oliver in the early part of Oliver Twist but later he becomes a figure of fun, a character on which the reader can laugh at.
Oliver Twist likemost of Dickens’ stories, has a happy ending. Here there is a conflict betweenthe realism of many parts of the novel and the sentimental belief that good must triumph over evil. It is a fact that the children who became criminals in Dickens’ time were always never saved by a kind old gentleman like Mr. Brownlow or a nice lady like Mrs. Rose Maylie. But it probably would not have been possible for Dickens to write his books differently. People expected and wanted a happy ending. And that is a generally the same today.
Post Views: 2,498
Sharing is sexy...