And never mind that noise you heard

It’s just a beast under your bed

In your closet, in your head’

(excerpt from Circle of Life)

ABCs of Horror is a collection of frightful short- stories that ties diverse types of fear together in an arresting account, which feels as genuine as the element sitting directly behind you when you are home alone. Authored by Anmol Rawat, ABCs of Horror is indeed a decent read with the fact that it’s a debut book. I don’t much expect first books to be in-line with the already ready market of readers who are accustomed to the taste of Ruskin Bond or other classic writers. Having started reading ABCs of Horror with the same mindset, I was raised to a conflict within myself about the pre-defined notion for debut writers, that too who start out with horror. 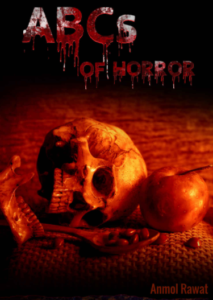 Front Cover of the Book

I believe ‘horror’ to be a tough one among other genres, and Rawat did try his best to deliver justice. Although I have a strong feeling that it could have been better. Read during night and you can have the chills, read it in the morning and you won’t feel a thing. I found it funny how the emotion, the set-up and the entire spooky scenario changed with respect of time. At first I thought it to be a thing about horror stories, but then again, never felt the same while reading Bond or Minakshi Choudhry. Talking about horror, I think the stories were more creepy or spooky than actually being horror. Although, the introduction to each story is well-built and mostly the narration is in conversational style. One liner climax and endings are what I admired the most.

What I like about Rawat is that, being a debut writer, he sticks to the simplicity of language and its composition. Unlike various others, who start out with sentence structures that are too tough to understand. Using gargantuan words, they think they are delivering quality but the reality is quite the opposite. Considering this, Rawat has done great job with stories, research and the structure. I only hope he had done more focus on the horror part.

By giving 3.5 rating (out of 5), I would recommend you to buy this book, which can act as a total thrill-enhancer on your boring rail journeys.

PS- Only available in digital format on Kindle.

You can buy this here on Amazon.